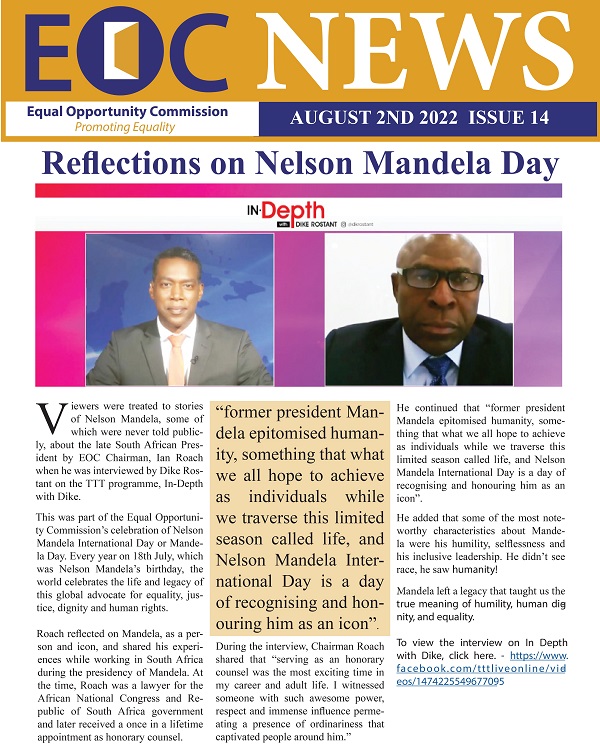 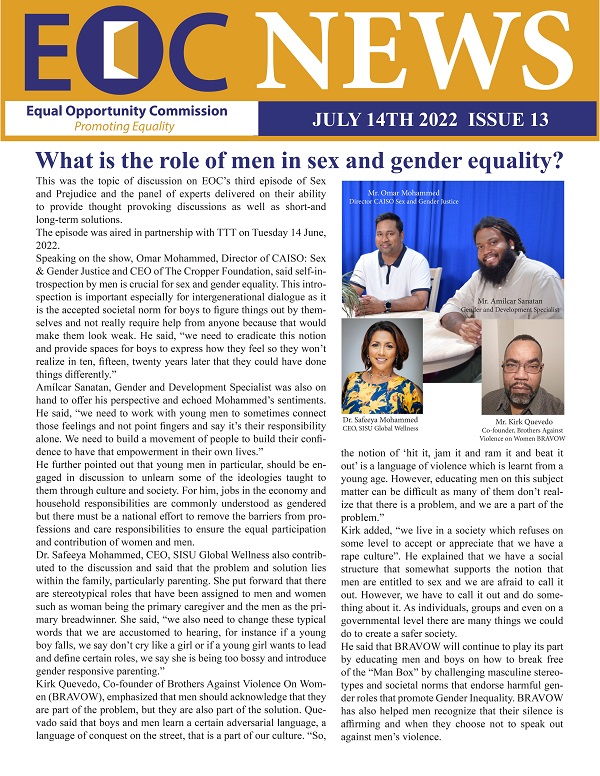 This was the topic of discussion on EOC’s third episode of Sex and Prejudice and the panel of experts delivered on their ability to provide thought provoking discussions as well as short-and long-term solutions.

It is unlawful for any educational establishment, board, or other institution to discriminate against both applicants and/or students who are already enrolled in a school or programme, based on any of seven protected status grounds under the act. These are religion, disability, race, ethnicity, origin including geographic origin, marital status, and sex.

Discrimination based on marital status

The Equal Opportunity Act prohibits discrimination based on a person’s marital status (along with five other status grounds). According to the act, marital status means the status or condition of being: (a) single; (b) married; (c) married but living separately and apart from one’s spouse; (d) divorced; or (e) widowed.

Difference between sex and gender

Sex and gender are sometimes used interchangeably but they are not the same, a distinction important to note, as the Equal Opportunity Act protects against discrimination on the ground of sex (and six other status grounds) but not on the ground of gender. However, the act also prohibits a separate category of conduct known as “offensive behaviour,” which is akin to hate speech in public, and one of the grounds on which hate speech is prohibited is gender.

Try conciliation instead of litigation

When we conduct our free inclusivity training sessions with organisations or when we do public education exercises, we explain the complaints process at the Equal Opportunity Commission (EOC) from the point of lodging a complaint to a resolution of the matter via conciliation.

Differences between race and ethnicity

Data at the commission shows that in many instances, members of the public are unable to differentiate between race and ethnicity. In most cases, complaints are lodged using the two characteristics otherwise known as status grounds, either incorrectly or interchangeably. For this reason, even though it is factually incorrect, the Equal Opportunity Commission groups race and ethnicity under the same header when collating data. This column attempts to clarify the two status grounds so that the commission can better assist citizens.

The television programme, ‘Sex and Prejudice’ has been solidified as one of the Equal Opportunity Commission’s (EOC) successful educational programmes. On the second Tuesday of each month, viewers can expect to see a panel of qualified and expert activists and advocates discuss sex and gender issues in relation to discrimination and inequality and proffer solutions to these issues.

Not only does it matter where we came from but, more so, that we have created and continue to create an envious paradise on this earth, not yet perfect but full of promise, an ever-evolving work in progress championed by our multiracial, multi-ethnic, multi-religious people seeking to achieve a nation that is wholesome, equitable and empowered by its diverse human capabilities. As part of this work in progress, the Equal Opportunity Commission plays a crucial role in the development of our national identity as the state body mandated to eliminate discrimination and promote equality.

Towards living together in peace

On May 16, United Nation member states celebrated International Day of Living Together in Peace. The day is observed to regularly mobilise the efforts of the international community to promote peace, tolerance, inclusion, understanding and solidarity in order to build a sustainable world of peace, solidarity and harmony. If we had to encapsulate the vision of the Equal Opportunity Commission (EOC), it would be just that. Simply put, we are working towards living together in peace. The vision of the EOC is “a society which is free from discrimination and prejudice, where human rights and diversity are respected, and where there is equality of opportunity for all.”

Reasonable accommodation: Role of the employer

In our past publications we addressed reasonable accommodation and the process of requesting accommodation in the workplace. The question you may be thinking is, “What happens next?” If an employee has verbally made a request for reasonable accommodation, it is best practice for the employer to draft a letter, memorandum, or e-mail confirming the request. It may also be beneficial to have the employee submit the request in writing or complete a required form and submit it to human resources.

Sexual harassment and the employer

Persons living with HIV and Aids (PLWHA) who face discrimination in certain settings because they are infected with HIV or Aids can lodge a complaint and get relief at the Equal Opportunity Commission (EOC).

From Russia without love: Discrimination based on a person’s origin

On April 26, the All England Tennis Club, the organiser of Wimbledon, announced that it will ban players from Russia and Belarus from participating in the 2022 tournament, which is due to start on June 27, as a response to Russia’s invasion of Ukraine, and to Belarus’s support of same. The Russian and Belarus teams have been banned from participating in the Davis Cup, which is a tennis tournament where national teams compete. However, at Wimbledon, and all other Open tennis events (eg, US Open, French Open) players compete as individuals, and not as country representatives. Wimbledon’s decision effectively penalises private individuals, for no reason other than the land where they were born. Without commenting on the merits of this decision or the geopolitical factors behind it, it provides a useful opportunity to discuss discrimination based on origin.

Sexual harassment in the world of work

On April 18, we dealt with the recent judgment in the Equal Opportunity Commission and Rishi Persad-Maharaj vs Cascadia Hotel Ltd case where the Court of Appeal recognised that sexual harassment can be a form of sex-based discrimination in employment that is prohibited by the Equal Opportunity Act Chap 22:03 and we said that we will treat with various aspects of this topic in further articles.

Today we will consider what constitutes sexual harassment. This topic is covered in greater detail in our Guidelines on Sexual Harassment in the Workplace which, as we noted before, is available for free download on our website.